Its taken a while (years) but HD CCTV is starting to filter through! 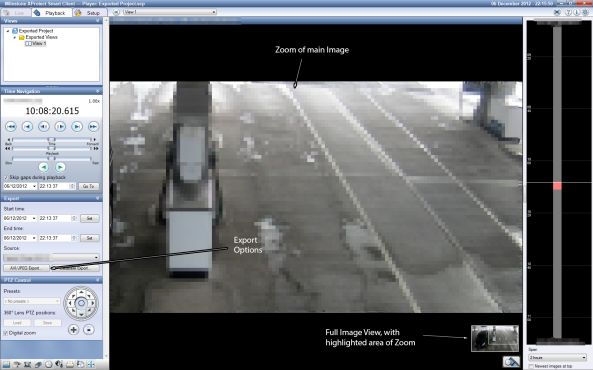 One minute we are dealing with 352 x 288 video that is half the size of standard TV, the next we have full 1920 x 1080 that is nearly three times larger! It’s just another challenge!

The Milestone IP System Playback interface is actually pretty good (my god – I have given a CCTV company some praise)! It loads quickly and after some initial clicking around to find everything, it is quite intuitive. That’s for me though – how a user with limited computer or CCTV skills will find it is another matter. It’s a pretty heavy piece of playback software as well, with lots of options and selections available. There is a good help file that can assist in navigating around and all in all, it’s pretty much all there…but its still missing something important.

It’s missing the details about the video – now there’s a change. After all the information and help guide – there are no details on the video it is actually assisting you to view. So that means more work to figure it out.

Hidden away in the export structure is a folder filled with a few information files but taken up mainly with consecutive, numerically numbered .pic files. Each of these are a similar file size. These .pic files are read by Mediainfo as a 1920 x 1080 H264/AVC Video streams. That’s the first hurdle over!

In order for FFmpeg to see and deal with these files correctly, you have to rename them to a video related file extension. This is unusual, as the program can usually ignore the file extension. However, in this case, it turns out that the .pic file extension causes some issues. (This may differ in other older / newer builds of FFmpeg).

Renaming all the .pic files was carried out in the powershell… i’m getting to grips with it!

Use the CD command followed by the folder address to work within the folder that contains all the pics.

The command to change all the file extensions:

That command basically states that every file ending with .pic needs to be renamed with the .mp4 file extension.

You can find some more info on renaming files here: http://www.howtogeek.com/111859/how-to-batch-rename-files-in-windows-4-ways-to-rename-multiple-files/

FFmpeg and FFprobe can now analyse the streams and reported that each  file was 30 frames in length with with a frame rate of 12.5 and a GOP structure of 1 I frame and 29 P Frames. So, each file was one GOP.

All we have to do now is join up all the GOPS! There are a number of GUI’s for concatenating video files together. MyMP4box was one I tried along with a few others. None of them worked!

I only had 54 files to drop in so I used notepad to write the command up by hand. I copied and pasted each file address and then just changed each file number.  The command (cut down) was:

Worked like a charm and when the video opened up in Virtualdub, it correctly reported 1620 frames (54 x 30) and scrubbed forward and back with no issues. The full HD video also dropped straight into my Edius Video NLE in a full 1920 x 1080 Timeline and looked fantastic on the HD TV.

So, we now know that it is possible to get the raw out and deal with it. Again, it’s ridiculous that companies don’t offer this raw out and re-wrap option. The save video options in the Milestone player all transcode the footage. Work needs to be done to identify the possibility of scripting the extract, rename and concat into a couple of clicks!

Finally, consideration has to be given on how this footage is presented, not everyone can deal with this amount of pixels. There are some good tutorials and guides for all NLE’s on what methods are best for downscaling HD to SD in an attempt to keep as much quality as possible.