Having a good player and having files that are easy to deal with isn’t too much to ask for is it?

The disk here comes with a player that requires installing and a selection of IVF Files.

After installation a shortcut appears on the desktop, and this links to the executable found within Program files at the file path below.

This installer has the following File Version.

These version numbers are important, and that’s why I have posted all their details. I highly expect there to be newer, and better software players available. However, after checking the website of Instek Digital, there is nothing mentioned and very little in the way of support for playback. A search of their site for MatriVideoPlayer produced a negative result. It may be that they are only available from the DVR or network install itself and, as these things seem to change more often than the weather, the chances of you coming across something slightly different is pretty big.

Once installed on one machine, you do not have to install it on others. It is possible to take the entire folder ‘MatriVideo Player’ and copy this to other PC’s without installing it. I installed it on a WinXP testbed and it ran on Win7 64bit with no problems. It’s worth archiving this unpackaged version for the future.

When you launch the player, you are greeted with the following interface. 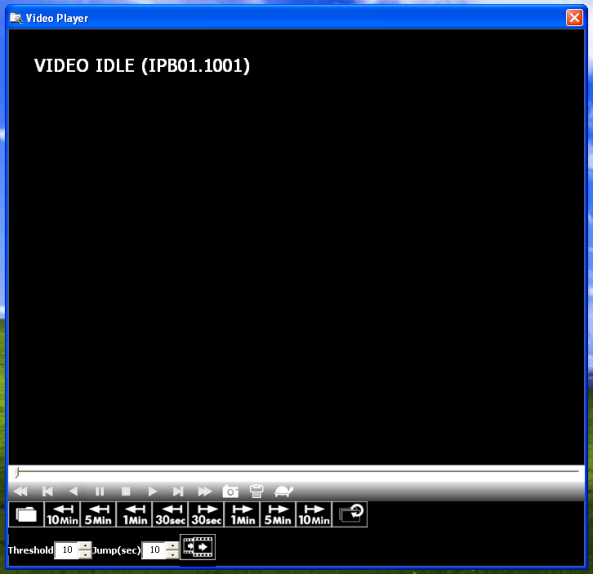 Bad: Along with a few points I will mention further along, there is no ‘about’ or ‘help’ pages or dialogue box. No tooltips when hovering buttons. The Threshold and Jump section at bottom – still cant work out what that does!

You load in an ivf file by using the familiar ‘folder’ button in the bottom left.

When the video is launched, the date and time overlay appears along the top of the picture. There is no way of turning this off or making adjustments. The font in this version is very thin. As a lot of the top of video from CCTV is commonly sky, seeing the time during daylight can be quite hard.

The files, as seen in an earlier image, are named with the start date/time and the end date/time. However in the files examined here each one had 2-3 seconds more than their file name suggested. This is important to note if you are going to be checking times or adjusting converts.

It is common for these type of players to start displaying different times after a bit of scrubbing back and forth. Its caused by the fact that when going back, it doesn’t pick up the same timestamp again and as such you can have two identical frames with a different time displayed. I didn’t find any such issue but its worth being aware of this problem.

The camera button saves a .jpg image into your documents folder. There is no ability to change the location or the save image format. The .jpg does have the date and time shown over the image and the image is exported at 704 x 576. I will come back to this!

A surprise was the button at the end right. Its the one with a folder and a circular arrow. It brings up a ‘convert to avi’ box. Time to test!

OK……I had already guessed from just watching the video that it was a type of mpeg and I was expecting that the ‘convert to avi’ would just be a rewrapper. Wrong – it was taking too long to be rewrapping. As I watched the percentage bars go up, I thought it would be converting into RGB Uncompressed (which is better than nothing, even though it eats HDD space!)

Wrong again!! What it outputs is an avi containing an NTSC (704 x 480) WMV1 Video!!!!!! Very bizarre but it got me thinking on what the original recording actually is, and whether it is from an NTSC system! Nevertheless, why wrap WMV inside an AVI container? Who Knows!!

Analysis of the files containing the video in MediaInfo and FFprobe revealed the h264 stream with a 30 frame GOP.

After testing with various configurations, for rewrapping I have found the best ffmpeg command to be:

As the original video was recorded at 6 FPS, I could have added the -r 6 into this but decided not to for my review.

Upon analysis, all rewraps have 1 duplicate frame at the start of the footage. It is not shown as a duplicate and does form part of the 30 frame GOP. It would appear that this anomaly is part of the clip export process as it is seen when playing the .ivf file within the player – but only when you are looking for it. The frame sequence is correct and FFprobe reads 1 less frame. It’s something to be aware of if intending to join clips.

Throughout my review I noticed a number of issues in the video. The most important one being the difference between the image presented by the player and the one direct from the h264 file (using virtualdub).

This is the .jpg saved using the player. It may be possible to see the blockiness and lack of range of colours within the highlighted area. This same issue was seen when the video is playing within the player. Motion caused by moving objects makes the distortion quite noticeable. I believe it may be partly caused by the fact that h264 video with a 30 frame GOP, recorded at a low 6 FPS is not going to look good. That’s 5 seconds between I frames.

I thought it may be also due to the jpg compression. To test this I screen captured the frame within the player whilst on pause. This .bmp produces a distorted screen size of 700 x 532 and the same distortion was present.

If I extract the same frame from within virtualdub using the rewrapped h264:

I did create another avi with the -r 6 added in and during playback it produced the same distortion but, importantly, when paused, it was not seen.

So, where does that leave us?

For the highest quality still images, rewrap the streams and use another player / tool to extract the raw frame. For Video, confirm FPS using the player and times and then rewrap into a container fit for your intended purpose.

Hopefully a new player will surface that has all these issues corrected.

I have searched through all the config files associated with the player in the hope that some of these settings could be changed manually. No luck! Its a shame because I believe it is actually using ffmpeg to do the converting and some of the media handling – it’s just not doing it properly!

Please see this new post if your video does not play as detailed.