A visit to the Samsung Display at IFSEC 2014

Reminder: I had 5 questions specifically relating to the exporting of evidential video from a Video Surveillance System.

I chose the new Samsung Techwin SRD-476D. My decision on this was due to it being another small unit, suited for small to medium businesses retaining their analogue, coaxial infrastructure. 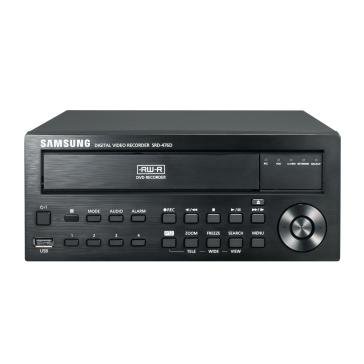 Samsung SRD 476 (Click the Image to go to Support Page)

How easy is it to export evidential video from this  device?

Having the USB on the front certainly makes things easier. The interface and navigation is pretty simple and retains a lot of features found in older model DVR’s. It has to be taken into conseration though, that I have had 12 years of navigating DVR GUI’s. To the DVR newbie – it may be a bit daunting! Although that’s the same for any manufacturer – not just Samsung!

The biggest issue is how they are named.

The .BU file export probably has to be one of the biggest nightmares when dealing with Samsung exports. They are only able to be played back within the DVR. A lot of evidential exports get mistakenly placed into the .bu format resulting in unplayable footage. It is also very common that once this has been identified – the footage is overwritten!

The export (.exe) was completed quickly – I know not to go near the .BU Format.

UPDATE (Sept 2014): It now appears that Samsung have changed the format of the BU exports and they are now readable! See the comments in this post

How easy is it for me to play the exported footage?

By selecting the INDEX.HTM, a web browser window opened in my default browser (Google Chrome).

Upon viewing the menu, I selected the Cam01 hyperlink, marked as an executable file. This link then acted as a download request and copied the file from the Export location to my Downloads Folder. I then ran the file. 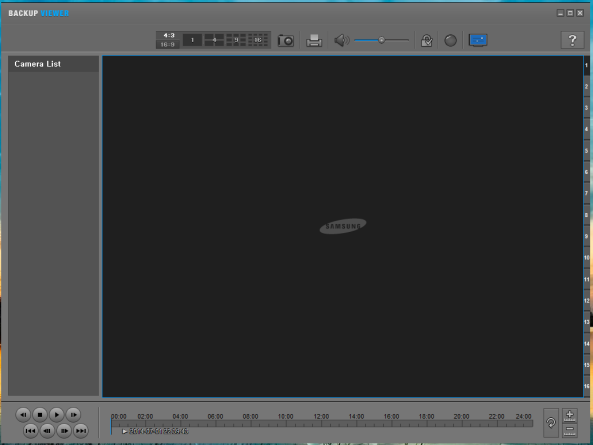 No method to load video and no video playing! As I had dealt with Samsung .exe files before – I had a pretty good idea what was going on. To confirm my theory, I examined the original export structure.

The reason why the executable could not see the video was that my browser had assumed the .exe file was a download. In doing so it has copied it to a new location and, when ran, it could not see the camera files. In the folder structure above, the .sec files are the cameras.

When I ran the INDEX.HTM file in Internet Explorer, it played first time.

Note: You don’t have to use the Index file. It is possible to navigate directly to the folder containing the .exe and .sec files and then just run it from there. 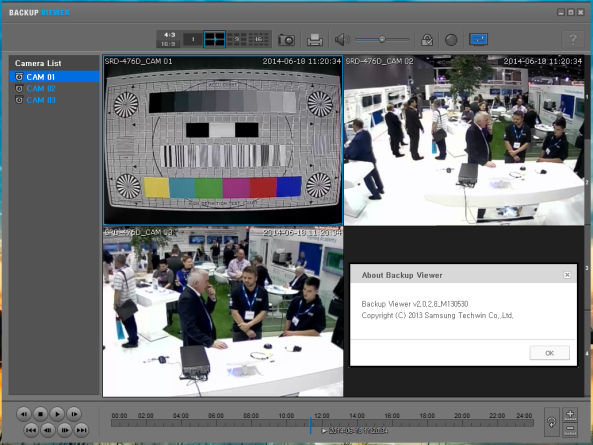 Note: the Support site does have an updated player V2.1 that does have a search for video option.

How easy is it to analyse and understand the format of the video?

There are no built in functions to tell me format, resolution, Aspect Ratio, total frame count, FPS, or frame type etc. The timecode overlay only increases in seconds. By using the frame advance I could establish a playback rate of 5 FPS rate. As a basic player – it does the job – but nothing else.

It was interesting to read some of the information on the Samsung site regarding recommended hardware settings.

With a few large H264 streams playing, corporate PC’s with a fairly low specification may struggle with this format and player.

The player can be freely resized. This means that the playback image can be easily distorted. The control buttons within the software for 4:3 or 16:9 ‘appear’ to relate to the display matrix of cameras rather than the Aspect Ratio of the video stream.

Are there any functions to deal with the evidential video within the software?

The only option is to produce a further compressed jpg image. The plus point here is that I can get an idea of the resolution.

As a result of identifying the resolution, it was clear that the playback window may not be displaying the image correctly.

Is it possible to deal with the evidential video away from the software?

Fortunately -Yes! All the streams are standard H264/AVC. This make analysis and re-wrapping fairly easy. This would be one of the options open to the Forensic Video Technician or Analyst as screen recording such a high resolution image could be a difficult process. The player also doesn’t present the image at its recorded resolution. The index and timing appear to be controlled through the date / time index as no Presentation Time Stamp was readable through software such as FFmpeg. This isn’t to say that its not there – it may just written in a way that other software cannot understand.

FVA software with media engines supporting H264 should have no issues in playing the raw .sec streams…

1. A small adjustment to the INDEX.HTM to make it suitable to all browsers could be useful.

3. Although a small playback utility is welcome, the lack of any further software to deal with the video could cause problems.

4. The only export option is Jpeg image. No uncompressed image and no video. It would be simple to create a video rewrap option to place the footage into an .mkv container, retaining the H264 encoding.

5. The recommended system settings need to be in the help dialogue box. This is the most likely location people will search when their 8 streams of HD footage starts stuttering! There also must be information on the video. Although the index file gives various logs, this will be a good location to place information on each .sec stream.

6. As a result of various issues, the easiest option to analyse and process the video is out of the Samsung software. The problem though is that, as the information is not supplied at all, its very hard to validate the data. As an example, how many frames are in the .sec file? Just obtaining this information and validating it takes time and effort.

7. If using very wide angled lenses, with a wide non standard aspect ratio – am I seeing a true and accurate representation of the scene? I will need to take a very close look at how this resolution gets recorded to and conduct tests to ensure the correct Aspect Ratio.

The information provided here, has been supplied to assist the video security business.

If anyone from Samsung wants to improve the systems using the information provided, please feel free to get in touch.