I have written about the importance of integration many times. I have also written many times about the everyday frustrations of law enforcement and security personnel when dealing with surveillance video.

Two things caught my eye yesterday whilst scrolling down my twitter feed.

You may want to turn the volume down if playing the video..its a little Extreme!

Now then…. Many people may be thinking – all that sounds great, what’s your problem?

Well, Panasonic Surveillance Video and many of their proprietary recording methods, such as in-car video have always been a complete pain in the backside to deal with forensically.

If I am unable to analyse a video file without the manufacturers proprietary player/codec then I may not be able to independently validate it. I may also be unable to analyse it fully and may have to deal with unknown variables in my reporting. It also takes twice as long to deal with as I have to get it out of one system and into another to manage for a case file.

The cause is the use of proprietary encoding.

Years ago, certain big players in the surveillance industry got a bit carried away and created some real Frankenstein encoders. Advertised to save bandwidth and storage space but retaining image quality. The problem was that these were terrible when it came to using them as evidence.

And that’s the reason why a DVR/NVR is there…. The video is being stored for later use… and most of that is for it to be used as evidence! Whether its a crime caught on camera, a suspicious incident or an employee breaching safety regulations.

Take another look at those headline points…

I need to know, how and what is compressed, and the differences between certain parts of an image. Is it new data, is it copied, has it come from other parts in the image?

Is there encryption in the file, blocking me from analyzing it or converting it? …. And yes, we can convert when required, and if completed in a way that does not affect the information.

You may remember that I said that two things caught my eye. This was the second.

The article details GM’s new Software Development Kit (SDK) for app makers. It opens the door to nearly 400 different pieces of vehicle information that can be used by an application on the vehicles in-car system.

So, I wonder if Panasonic are doing something similar for their proprietary video. Will they open the door with an SDK, allowing companies like Amped Software to fully understand and deal with their video forensically?

Look at the Milestone Integration with Amped FIVE for example. You can complete the entire forensic acquisition process and/or the analysis and investigation stage – all within the software. 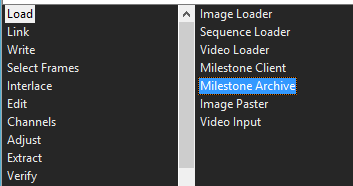 Dealing with Surveillance video is made so much harder when systems are locked down, and use a language nobody else understands or can interpret.

Open the door and integrate!